Ah, Interbike…Every year people look forward to the new bicycles and components that are introduced there and the many hours spent roaming the booths. Some prefer the day before Interbike which is set aside for dealers to test out the bikes they will be selling over the next few months. Those who aren’t privy to attending the show are given hints and teasers from many of the bicycle oriented websites. What most people miss out on are the new tools.

Bikes are bikes and, though the travel increases or the weight drops, they will continue to be bikes. I am sure you can tell that I don’t get excited much by bicycles themselves these days. I get my jollies at the show by helping my local shop make their meetings on time and then searching the halls for things that will make my life as a mechanic easier. I also enjoy chatting with friends from the circuit but my search for tools is the primary focus.

Every year a few things pop up and some actually have a purpose. Here are some I feel a mechanic should not be without:

Park Tool – They were celebrating 40 years of tool manufacturing with some new tools and showing off some old prototypes and truing stands. The two things that really caught my eye were the new crown race remover and a spoke tension measuring device. I’ve personally had one hell of a time removing some crown races and tend to resort to the screwdriver and hammer method. This new remover fits most crown races including the 1.5 standard and removes the race with some simple turns of a handle. 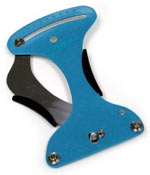 While there Calvin Jones took some time to show me how simple the new Spoke Tension Meter was to use and mentioned that is will hit dealers at about half the price of other tension meters. Plus, its design allows it to fit bladed spokes and the oversized round spokes found on Mavic’s CrossMax wheels.
Other items include height extensions for their race and home repair stands, moto style tire irons and a torx wrench set which is truly required of all downhill mechanics and for work on team trailers. 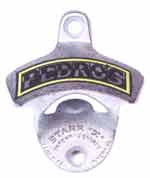 Pedros – The yellow tool company showed off a couple tools suited towards the shop or neutral mechanics, most notably the Equalizer Pedal Wrench and the Wallmount Bottle Opener. The bottle opener can be set up anywhere from the shop wall to the door of your trailer and makes opening that late afternoon drink so much cooler. I witnessed a prototype being used at a 24 hour event a few weeks earlier and can attest to its quality.

The new pedal wrench is longer for more leverage and comes with a rounded handle and grip to cut down on palm stress. This should cut down on stress caused by overtightened pedals.
Other new tools include a fourth hand tool, double sided spoke wrenches, hex wrenches designed for pedals and a mini pit kit to help your riders keep their bikes clean.

USS Bike – The folks at Ultimate were showing off their new Pro Truing Station which consisted of an improved truing stand and well thought out base. The truing stand is single sided with an adjustable gauge for side measurements and another for the hops. This unit will fit on the base it comes with or on the top of their Pro Repair Stand. The base includes slots for numerous spoke wrenches, two containers of spoke prep and two angled slots to hold your drive side and non-drive side spokes. It also includes two cups for nipples and other items.
The stand is a bargain at $75 retail and will be available at a greatly reduced price to licensed mechanics when it is available in a couple months.

Stein – I wasn’t able to see any of their new stuff at the show but I did find a nice tool of theirs in Eva’s toolbox the day before the show. Earlier this year I stopped using chain whips in favor of Pedros’ ProCog Wrench. Now I must have the 11-14 Hyperhandle from Stein. It has heat treated pins in four combinations to hold 11, 12, 13 or 14 tooth cogs during cassette or freewheel cog removal.

Surly – They also have a new bottle opener only this one is affixed to their new chain tensioner. The next time you are working on track bikes in a third world country, make sure you have one of these affixed to every one of your team bikes. If you tend to spend more time here, slap one on your bmx or single speed pit bike. 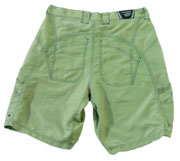 Nema – In an effort to keep us mechanics comfortable, they have come up with some new shorts including the Truckdriver with numerous side pockets for tools and a cell phone. In keeping with the bottle theme, they also offer the Milkman with a special pocket for your favorite cold refreshment. For me this would mean a bottle of Henry Weinhard’s vanilla cream soda. 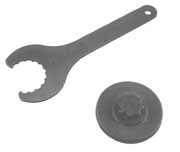 Shimano – Shimano has done a great job of consolidating tools and this is apparent with the new XTR disc brakes. The rotors are locked in place with a lockring that uses the same tool as their cassettes. Cool! On the other hand, the new cranks will require two tools to install or remove. Give Shimano a call and ask about the availability of crank adapter tool TL-FC32 and crank installation tool TL-FC16. While you are at it make sure you have some spare 9sp chain pins. 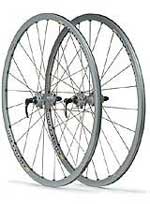 Mavic – nothing new on the tool front but they introduced a pair of wheels which could help mountain team mechanics reduce their trailer inventory. The new 700c SpeedCity wheels are designed to fit into disc brake equipped mountain bikes allowing riders to use them for road training instead of wearing out their knobbys. This means the riders can keep their road bikes at home and actually race and train on their mountain bikes at the race venues. They should be hitting stores soon very soon…

Well, that about wraps up my review of the 2002 Interbike show. There were some team things going on as well as mechanics appearing in other team uniforms but those stories will get written about as soon as the rumors are verified. In the mean time, if you are a mechanic, make sure you know how to ride before you get on a bike. There isn’t much that is more embarrassing than shop mechanics wrecking borrowed bikes and bodies at the Outdoor Demo. I think we counted at least three broken wrists, a couple broken ankles and numerous cuts, bruises and abrasions, and these were the ones who returned for more…