Another year, another Interbike. The bike industry gathered in Vegas again this fall to show off items that will soon be hitting the shelves. As in previous years the folks at ProMechanics hit the floor looking for tools and other items designed to make your life, the life of a race mechanic, easier.

The show began with the Outdoor demo, two days of outdoor bike testing in the desert. The intention of this program is to help retail sales staff provide realistic answers to their customers based on personal experience. The negative side of this is the opportunity for ‘bad’ riders to wreck bikes at someone else’s expense. We watched a few riders attempt to jump four inch travel bikes off ten foot cliffs and noticed many high speed riders with flat tires. Its then up to the company mechanics to get things repaired so that the hundred people waiting in line can test out the same bike. Most companies even drag their corporate team mechanics out to help.

Along with these irresponsible riders come killer overnight winds. We hit the test area early on the first day and it looked like a bomb had gone off. One pop-up tent was found flat against the side of a trailer. Another was found in the windshield of a box truck. Many were flattened and quite a few were a mess with broken legs, missing tops, and torn covers. Some even took flight and landed a half mile down the road. Guess who got to rectify that situation… 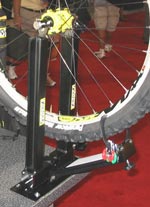 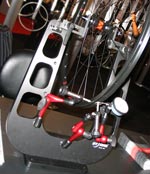 Back at the Sands Convention Center we discovered a few themes amongst the tool companies. One centered on truing stands. Pedros was displaying a stand with replaceable guides that held 20mm+ axles and is capable of centering a 165mm hub. DT also jumped into the truing stand business though there’s looked a lot more complicated. It came with numerous attachmentsfor measuring the rim and dual sliding guides for the hub. On the positive side, wheels fit better in the DT stand and thus there is not stand adjustments necessary like on Park and probably with the Pedros. Park also offered a new home mechanics truing stand and upright extensions for its professional truing stands. These extensions allow for 29″ wheels, 20mm axles and will allow up to 160mm width hubs.

The other big theme was work stands. Park was showing off numerous race stands like the new euro-style PRS-20 Team Race Stand. Bikes mount on this stand by removing a wheel and centering the bottom bracket in its base. This is the stand that has been used by Lance Armstrong’s US Postal team mechanics throughout the season. Park also introduced accessories for is heavy duty Professional Race Stand. New for this year are truing stand attachments, a paper towel holder and a bucket and tool kilt that mounts on the stand’s main pole.

Pedros bumped up its work stand offerings by taking over distribution of RockStand and creating new repair center versions. Now you can get their traditional folding repair stand, the heavy duty race site RockStand and heighth adjustable single and double head units for the shop floor. The heavy duty race stand has been a long time favorite of ProMechanics and Mavic when working on heavy downhill bikes.

In keeping with the theme, Ultimate had an improved clamp on the professional stand and a new lightweight stand for the race mechanics. These two stands were still in prototype form and were being shown behind closed doors. ProMechanics hopes to have more information on these in the near future as they are aiming for February delivery.

Beyond the stands were other tools including a headset press and torque wrench from Pedros plus chain link pliers and Campagnolo Hiddenset reaming guides from Park Tool.