Each year the industry gathers to show its new wares to retailers in hopes of exciting sales and getting a bigger portion of the market. Interbike has been the tradeshow of choice for the States and has brought mechanics and sales staff from all over to the city of Lost Wages, er, ah Las Vegas. This year I had the chance to hit the show floor for six hours before driving off to the next race. As is usual, I spent my time there checking out tools and the things we will experience next season. Here are some of the things you should consider investing in:

Park – Every year Park comes up with some great ideas. This year is no different with numerous items I have to add to my tool box, like the folding chain tool. I love the wooden Shimano chain tool as well as the large Rholoff and Pedros models but the idea of a large model that folds up to fit into a tigher space in my toolbox, gotta have it. Another gotta have tool is the new BBT-9 which combines both tools necessary to install the XTR style cranks. Don’t deal with XTR much, too bad. You will need this for Dura Ace, Saint and XT as well. I will also be acquiring the new CWP-6 which combines the pipestyle crank extractor with a pin capable of removing both Shimano’s splined and ISIS cranks. True it does not include a torque arm but I already have the wrenches necessary to use this and now I have two larger tools removed from the box. I also heard that they are introducing a new stand for race mechanics. More info on that to come.

Pedros – With cyclocross season hitting soon, Pedros took a hint from motocross racing and added umbrellas to their list of tools. Get yours before the rain hits. Like Park, they added a XTR style bottom bracket cup tool. Other tools include the Pro Socket Handle, a Campagnolo bottom bracket/cassette tool, a new brush set for the race mechanics and the addition of fifteen tools to their Tool Kit.

ITM – Tired of dealing with customers who consistently overtighten the little 4mm bolts on their lightweight stems, ITM debuts a small torque wrench with micro-graduations. This is the best looking one I have seen in a while and is small enough to fit into your toolbox without taking up too much space. 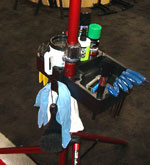 Ultimate – They have improved the Pro Repair Stand by adding a large rubber knob that can be used with the palm of your hand rather than having to rely on grimmy fingers, an easy touch and twist. They also introduced a tool tray with space for various tools, lubes, your coffee mug, and includes a basin with a drain plug capable of holding small parts or allowing for cleaning of cassettes and chains. It also includes a hook for rags and mounts on either the Pro or Consumer repair stands.

Shimano – With the introduction of Saint, Shimano is offering the LR20, a tool necessary to install the rotor lockring on the front 20mm axled hub. Shop mechanics might also consider the HG09 tool for the new Capreo HG70-S cassettes.

Cannondale – Here’s one for the neutral mountain bike mechanics out there. Though not new, the number of lefty wheels is growing and thus you will need to figure out a way to true them. This is made much simpler with Cannondale’s Lefty truing axle. Give them a call and ask for part number QCTL108.