Each year the folks from the bicycle industry gather together in Las Vegas to show off and check out the company wares for the following year. Some of these companies debut these items prior to the show but for most this is the official presentation of new stuff. This is also a time for shop personnel, especially the mechanics to collect swag from the various vendors. This experience is knows as INTERBIKE!It has been a while since I was last able to walk the whole show and I made the best of the two days I was there. I tried to hit ever booth and find anything that could affect race mechanics. The first booth as we entered the show was that of Shimano and I picked up a 2002 service manual. If you were not able to get one from the show, you should contact a customer service rep at (800) 423-2420. You may know most of what is required for Shimano components however the new manual includes updates on pedal/cleat compatibility and updated service instructions on their disc brakes and pedal maintenance.

Shimano also changed the lacing of the rear Dura Ace wheel, so, for those of you who carry spare spokes, its time to call them for a new length.

While checking out the new components in the Shimano booth I found Ric Hjertberg, of Wheelsmith fame, describing his new WrenchWise program to Andy Stone, Shimano Road Service, and Vince Gee, Postal Team Mechanic. This new service management program allows the shop to measure and manage hours as thought they were sku’s. This also may come in handy for tech programs trying to determine the true cost of working events. For more information visit www.wrenchwise.com. 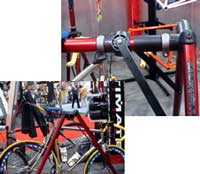 A few booths down the aisle was Ultimate who were displaying numerous work stands and a new pit bike stand. It is not yet in production, however they mentioned it could be produced quickly for anyone who needs one by using some equipment from their drum stands. This rack replaces the cheesy pvc and/or wood racks many of us built to hold our bikes at the mountain bike races. This rack uses their strong junctions with traditional Ultimate pipes and folds into a tidy bag. Price on this rack is estimated at $200. For more information check out Ultimate at www.ussbike.com.

A quick left took me to the booth of Pedros where they were displaying a new Master Tool Kit which comes in an aluminum box similar to the polycarbonit boxes most of us carry. The box includes their wrenches, the new shop quality chain tool and a magnetic bowl. They were also displaying the latest version of their bike stand (with awesome one hand capable clamp), a DH tire iron (moto tire iron with nice handle attached) and a saw which works as both a hacksaw and jabsaw. The things that excited me most were the number of photos of mechanics used in their catalog and the 12mm hex wrench I have been looking for to remove cassette bodies. These items are on display at www.pedros.com.

After Pedros we hit the Park Tool booth and MAC member Calvin Jones ran us through the new items on display. The were pretty excited by the heavy duty CN10 cable and housing cutters as well as the Torx 25 T-handle wrench for disc brake rotor bolts. They have also added a service section to their website to compliment the Park Tool School program they introduced last year. They also showed a toilet paper holder for those who need to have more bike stuff in the house or something other than bike mags in the bathroom. These goodies and others are at www.parktool.com.

Other things found at the show were a rotor dish measuring tool at United Bicycle Parts that works on either drop outs or mounts to Park Tool truing stands, rack companies showing numerous front wheel clasping mounts for upright bikes on the roof, a new saddle design from SDG that will cut down on saddle replacements for downhillers and jumpers, a 2002 tech manual from SRAM, and new wheels from Campagnolo. I tried to get a new tech manual from them but they were only handing them out at their morning seminars and I did not find time to attend them. Thus, I will be giving them a call in the next couple days at (760) 931-0106. For those of you who can’t wait, Campagnolo listed some service information on their website at www.campagnolo.com.

I also came upon a booth entitled ‘Break It, Fix It, Ride It’ in the new company section of the show. They are offering an interactive repair program similar to that of Park Tool, however this focusses primarily on mountain bikes and comes on a compact disc instead of in a book. They recommend it to shops for training new mechanics or for sale to customers. Their program can be found at www.bfr-it.com (site is currently down).

Jeffrey Hopkins gave me a sample CD and I checked it out as soon as I returned home. The program loaded quickly, comes with Adobe Acrobat Reader 5.0 (the latest viewer) and does require restarting the computer. Upon starting you are offer two choices, one to click on Tools and go to their glossary or bike parts and tools or two, to click on a bike part. I chose the rear wheel which brought me to another page where I could choose a component of the wheel. I chose the cassette which sent me to another page with options for installation, removal, adjustment, maintenance and technical. It is well laid out, simple to use and covers most if not all the items on the bike.

Well, that is my trip to Interbike. There were lots of new bikes and components and you can read about them at websites like Velonews.com and mtbr.com. There was also a lot of Swag and I most enjoyed the 80 Year Anniversary glass and Tour jersey pins from Shimano.