Another Philly and another gathering of the mechanics. Mavic sponsored the 2nd Annual Pro Mechanics Charity Invitational while moving it this year to the new Competition bike shop in Manayunk just below the famed wall. They also moved it to Friday afternoon hoping to make it easier for the team mechanics to participate and brought in a slew of UCI officials to keep things in line…and to give them another taste of what we do as mechanics. 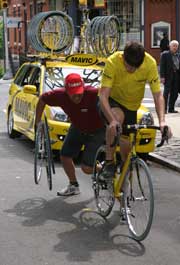 For those of you who missed out, the rules are laid at as such:
1) Each mechanic must leave the vehicle with 3 wheels: a front, a 9 speed rear and a 10 speed rear. A penalty of 10 seconds was added to their time per wheel that was left in the car.
2) After leaving the car, the mechanic must close the door or a 5 second penalty was added to their time.
3) The mechanic had to cross the finish line with all 3 wheels or a 5 second penalty would be added to their time per wheel left on the ground.
Yes, this was heavily biased towards neutral mechanic style wheel changes but that’s what Mavic does…

To keep things even and allow the mechanics to use their own vehicles, the following conditions were laid out:
a) the same size bikes were used for each mechanic
b) the center of the crank on the bike was placed 18 feet from the front of the rear door of the vehicle being used
c) the finish line was taped off at 15 feet from the bike’s crank
d) the rider on the bike had the left foot on the ground and the right foot in the toe clip
e) the bikes were place in the 53 chainring and the 4th gear up on the cassette
f) the rear skewer was placed between the stays and the front behind the fork
g) all the wheels being used for changing were gapped the same amount

Twelve mechanics lined up this year taking turns in a time trial format wth times taken from the moment they opened the vehicle’s door to the time they crossed the finish line. Each mechanic would change a rear ten speed wheel and then push the rider, on the bike across the line. The top mechanics would then progress in a head to head elimination style format. In the head to head battles they mechanics would not know which wheel to change until they arrived at the bike. Both riders called out the same service though so it would be even for both mechanics. Oh, to add to the stress, okay for kicks, the local television station was set up with cameras and a news radio station had us on live.

Even though the course was set up on a slightly uphill street the average times were faster than the year previous. Maybe it was the dryer roads, maybe it was just hungry mechanics. Last year’s top time was 17.46. The top three this year were Chris Clinton from Mavic at 14.47, Chad Contreras of SATS (last years winner) at 17.60 and Alex Vaivars of Mavic at 18.36.

A few rounds in and the top four rounded out as such:
a) Chris Clinton (Mavic) versus Mike Spilker (recently retired Navigators)
b) Mike Berry (Mavic) versus Chad Contreras (SATS)

As luck would have it the two fastest wheel changers in the time trial fumbled during this round leaving a battle of the Mikes for the finally. With both Mikes lined up the new condition was laid out as both wheels having to be changed. The whistle blew and both mechanics set after their riders. Mike Spilker beat Mike Berry to the line however his front wheel fell out when the rider stopped. The final was about to revert to Mike Berry when that rider mentioned his rear wheel slipped. Thus a redo was called for.

This time around Mike Spilker got his wheels on correctly and beat Mike Berry to the line by a hair. Not bad for a guy who is supposedly retired and spent most of this competition shooting photos.

So, for being so fast, Mike received a lot of hoots and hollers and then was presented with his awards. The trophy this year was a Mavic SSC (Special Service Course) motorcycle helmet with Mavic’s anniversary support car mounted up high. Mike also received a pair of Mavic Ksyrium SSC SL wheels and a check for $500 for the charity of his choice. His decided on the US Bicycle Hall of Fame in New Jersey in order to help support the new race mechanics section being assembled there.

Word is Mavic will provide another fun competition for the professional mechanics at next year’s race. Will you be there?